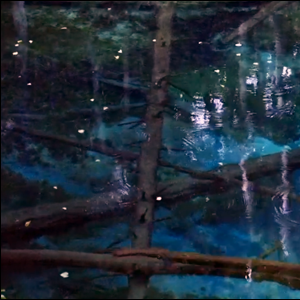 I cannot describe it properly. It is some kind of absolute theoretical construct. Lake Mashu in Japan.

The “Japanese” way-of-living and/or culture? The closeness and admiration/devotion/worship of nature in combination of a super high-tech culture?

The idea of “craft”, (as I’ve understood it…), is that it is not what is being produced that is important.

The materia that is produced does not matter, rather it is the way in which it is produced that is important – it is the knowledge, history, tradition, craftsmanship and the techniques used, that matters. I do believe there is an analogue to music and music playing.

For example; the most holy temple in Japan, the one belonging to the Emperors’ family (and as far as I know it is only members of the family that are actually allowed to visit it. Since the Emperor is a direct decent of God) is being completely rebuilt every twenty years or so… for many hundreds of years and at great cost.

That is such a completely different view of the World compared to my materialistic European upbringing. A building in the city is a ephemeral construct, the actual building in its self is not meant to be eternal – it may have a life-span of twenty odd years or so (on the plot), however the idea of the building is eternal.

In short it is an alien concept too me. And it has been fascinating me forever and it still does.

And the many other ideas that are utterly foreign, yet familiar and coveted. The realization that even if I’m just a curious visitor, I will per definition always and for ever be a Ganjin, a foreigner – which something that I used to.

There are so many similarities with my upbringing and I draw this simple conclusion. It seems to be a universal thing, based on the human existence. “- Me and You, rollin’ down the strip slammin’ Cadillac doors.”

My father was dubious towards the whole concept to say the least… he did not trust “them” and did not see any greatness in the far east what so ever. We had lengthy and animated discussions on this very subject.

“- Have you ever been to the far east?”
“- No, unfortunately, I have never had the opportunity to visit the far east.”
“- Did your father ever visit?”
“- I can’t know for sure, but I’m quite confident that he never ever actually visited the far east and that his conclusions where utterly based in theory.”

Theory and the life of the mind? It is not necessarily the same thing. Ideas are always stronger – in the end. However, I’m confident that it is important to separate the two though.