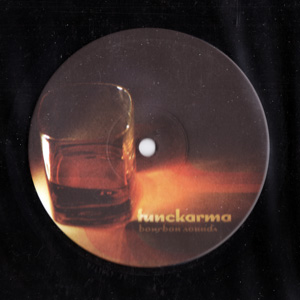 After the blinding opening done by this relatively new label the plate number four offered by delikatessen is delivered by none other than Funckarma. The Bourbon 10″ contains four tracks and starts of with the previously released “Noir” and it’s crunchiness defined giving the track a hint of harshness however lush strings creates a soothing background. Apparently “Noir” is also included on a compilation on the label “Prospect Recordings” at the moment unfortunately unheard. The second track “Sphere” is filled with warmth, atmosphere, basslines, string and choir arrangements and the sweetest of melodies. It’s in all aspects a complete and beautiful composition and probably my personal favorite on plate4. The b-side offers “Velvet” a string filled and layered track with steady and solid beats. On the down-tempo side of things the haunting soundscapes creates atmosphere. The fourth and last track “Sparkzz” features more beats of the crunchy persuasion with an abundance of layering, powerful and beautiful melodies with more than a touch of melancholy. Classic stuff! To sum up, yet another fantastic piece of music signed Funckarma out on the label called delikatessen. Apart from the high quality artists releasing contributing to delikatessen’s 10″ series the packaging and artwork is also excellent and naturally the “Bourbon Sounds” 10″ is far from being an exception.