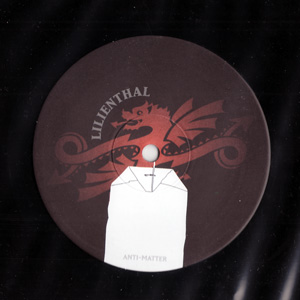 The fifth installement in the delikatessen 10″ series is called “Anti-Matter” and features Lilienthal. Oddly enough Plate5 was released before the fourth release by Funckarma. (At least where I obtained my copy…) But now the order has been restored and five delicious plates are available from delikatessen. The fifth being a four-track offering. “Infinity” contains light treading beats, ultra-crisp percussive elements and beautiful melodies a serves as the perfect opening of the Anti-Matter record. Followed by “Kitty Hawk” down-tempo feeling to the beats and an adorable choice for melody – block-wood reminiscent sounds. A healthy dose of handclap helps the track’s transition into an up-tempo drum’n’bass inspired setting to the beats, nice! “Compactor” is built around simple and effective beats creating confident forward movement alongside a hint of glitch and dreamesque soundscapes. Finally “Shadows” that contains some really nice bassline handling and beats reminiscent of previously mentioned “Compactor”, colored with keyboard and just the right amount of glitchy elements. Delikatessen is a label very much in form and Lilienthal did his part of the job, indeed.