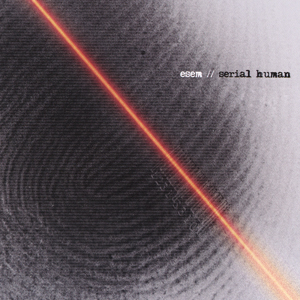 The second full-lenght album produced by the talented Esem and released by Merck. “Serial Human” is decidedly more up-tempo than the last album (Enveloped reviewed in 2002), drawing heavily on techno, house and especially electro without becoming generic whatsoever. The twelve tracks on “Serial Human” displays a darker and more intense musical side of Esem and could be considered as a slight change in direction. Not fearing the more experimental side of things there’re also completely beatless sonic passages included on the album as well. “Tjiccli” is the first track and the harder setting of the album can be sensed straight away it’s a well-produced track with interesting sounds and quite an atmosphere alongside clinical beats. “Cee” displays an interesting take on the way of the Americas strings are included. The third track “Bleece” has less tempo than the previous track and a melody to kill for. The (extremely) long titled “Swift urban departure from what was once an innocent soul” starts of with environmental city sound takes and develops into a fairly fast paced bass monster, with straight forward and effective beats, nervous and somewhat claustrophobic synthetic constructs.”Sofiatram as I hear it” is beatless sonic experiment and one can but hope that the sounds of the trams in Sofia aren’t amplified in any higher degree! “Square Lamp” and “Outburst Nue” together with “Alipe Lacks” are currently my personal favourites of this album. “Square Lamp” is a clever take on electro, but with lots of atmosphere and masterly constructed soundscapes. Mid-through the track breaks down just to resume with even more intensity. And that is the key word here, intensity, not aggressivity. Brilliant! “Outburst Nue” comes next in line and that too is a marvellous track with solid beats programming a hint of electro and great atmosphere. More heavy basslines and straight forward beats in “Kyes Irrload” and “Scatterhaunted & Vellin Street” that follow. “Upward Instlr” is a mood change with gentler beats and fantastic melody leading on to the best track on the entire album with superb beats programming, fantastic bassline and the sweetest of melodies, all put together in the best possible way, two words: instant classic! “Tawn” ends this delightful second full-length by Esem. Who’s responsible for this release? Well, it’s Merck of course!