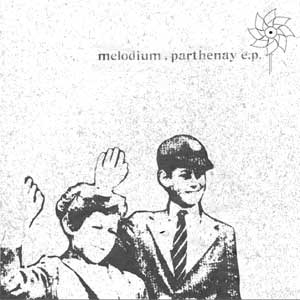 “Parthenay EP” is the very first release from  (Adim) comes from Melodium. Autres Directions (look in ED’s link section) is a French electronica web-zine and Adim is their web-label and they take DIY very seriously: “available records on adim can be dowloaded for free, the artists involved having agreed to that, original works and creations belong to the artist alone, cd covers are available for downloading and printing. records can thus be burnt on cd, copied on a minidisc, saved on a hard disk, etc. in the same way, anyone can create his own cd cover or print it on coloured paper… it is up to everyone to do according to one’s own wishes. DIY” The “Parthenay EP” contains eight tracks in total five by Melodium and three remixes. Starting off with “Ichtio” light beats alongside chords, lo-fi and toy like sounds, then mid-through the track breaks and the beats are mashed-up, yet they’re still light. Quirky is the word. “Terminus” has a lo-fi acoustic feeling to it, feather-light beats and very strong melody. Great atmosphere and excellent melodies in the following tracks, hard to pin-point exactly what makes these track so good, but “Pause 1” and “Pluraple” are the best tracks on this EP. After “Pluraple” follow the remixes, “Ichtio (Remixed by Motenai & Mimao)” is a quite conventional sounding take, on the original track. “Mmiomm (Remixed by Dudley)” acoustic guitar, breaks and a healthy dose of bass, made for the eclectic dance floor maybe? “Terminus (Remixed by Depth Affect)” added basslines, sampled vocals and attempting to set the track in definite hip-hop mode and it’s working. “Mmiomm” the final track on the EP and like “Pause 1” and “Pluraple” it got that understated and hard-to-catch quality, very nice indeed. The first release on Adim promises more and the next release will be featuring one of the remixers, namely Dudley. The debut album entitled “seasonal LP” will be carrying the catalogue number Moulin 002 and downloadable in the near future.