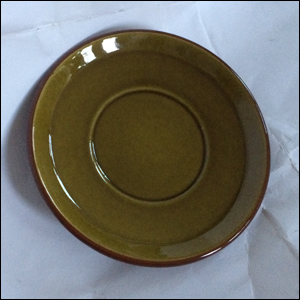 Discarded saucers, I salvaged three of them; they’re from the Swedish manufacturer Rörstrand and they should have been accompanied by matching cups, helas they were nowhere to be found.

As far as I know they’re from the sixties, well actually I happen to know that they’re from fourth quarter of 1963 from a series called Karavan (according to the stamps).

They were trow away as trash and belonged to someone at some time…, yet, just now they sit nicely together with the set of ant-zen coffee mugs/cups.