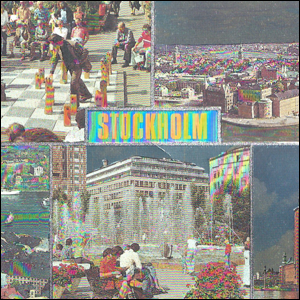 The poor image quality? I apologise.

But, it is a “reflective/3D/metalic” postcard from the late seventies (1970’s). And it does not scan that well. It was sent to me a long time ago on one of my many birthdays.

The back? It is private and for me to know, only. Junior is allowed to read it of course, but I don’t think he’s all that interested to be honest.

The title? It is not an actual word. I’ve made it up. It is word-play. “Snarka” means “snore”  in Swedish… the word for the vessel of eternal sleep is almost identical?

Hence,  “Snarkofagen”, which is (if you wanted it to be) similar to “Stockholm” (I mean if you tried hard enough it could be the very same thing).

“Snarkofagen?” The place were I dwell…