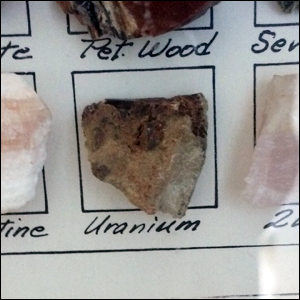 In a small framed collection of earth minerals sourced in Arizona and dating from 1970 – hanging on the wall of my living room you will find it.

If ever it (the little rock) would traverse the Ocean again it would probably cause serious problems for anybody transporting it.

One reference in this particular case would be a Kraftwerk album from 1975?

Natural uranium can be used to fuel both low- and high-power nuclear reactors.

Please see: Not On The Wall I.