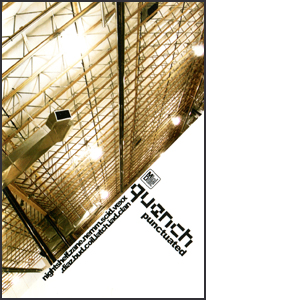 A definite soundtrack opening on this the latest Quench release “Punctuated” – a full-length album released on the somewhat strange and unusual MD format. The format is the trademark of US label n5MD and what an excellent release it is! “Punctuated” starts of with a beatless the soundtrack-like “nightshelf” the beautiful and emotional soundscapes lead on to “Zane” a classic vein Quench track with beats, melancholic strings and basslines of cheer bliss fused with layers of sonic elements. “Nemm” and “Scid” follow along the same atmospheric, beat-filled and structured path. Fifth track “Vexx” is a dub monster with a brilliant and haunting build-up, rock solid beats and a bassline to die for. It contains all the classic elements of a dub track and yet it is unmistakably a Quench track and nothing else. It’s musical greatness witnessed first-hand. In “Diaz” and “Bud” the dub realm is left behind and they both move into a territory of much higher beat density and does so beautifully as always accompanied by Quench’s version of melodic perfection. The eight track is the superb “Coil” with an amazingly colorful sonic picture, imagine if you will a solid hand-clap/ride, merciless strings and layering, building up alongside a subbass moving forward ever so steadily. “Latch” and “Iad” follow with more first-class electronic wizardry and the second of the two tracks being a bit harsher in appearance and construction. The eleventh and last track “Clan” has been previously released on the recently reviewed and excellent On 002 compilation. Of course this release is limited and the format’s quirky, but never mind that, this is as good as it gets. It is electronic music of the highest possible quality and finest grade. It doesn’t come more recommended in short, it’s an absolutely essential release.